The steam tug ALBERT towing the 4 masted schooner JAMES E NEWSOM from the South Dock on 31st August 1937.The Albert was built in 1902 and was moved to Swansea in 1924 by the Alexandra Towing Company when they established a towing service in Swansea.She was broken up at Llanelly in 1938.

The James B Newsom was a carrying a cargo of Welsh anthracite for Prince Edward Island in Canada.She was built in New England in 1919 and although her owners were at this time were from Nova Scotia, she was registered in Bridgetown, Barbados.She was 178.4 feet in length,  35.6 in breadth, and had a draft of 14.7 feet.Sadly she was sunk by a German UBoat in May 1942.

Picture and information from the collection of the late Gareth Mills.

Picture from the collection of the late Gareth Mills 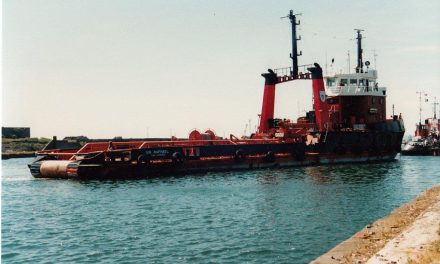